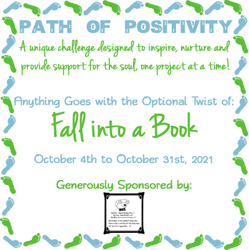 Hello to all our wonderful crafting friends! I'm starting to do some catch up and am finally able to present the winners for Challenge #95. I hope that you all continue to stay safe out there in whichever corner of the world you are located!
First we'll share the names of the Voter's Choice, the Most Inspirational and the Random Winner and then we'll move on to showcasing our DT Delights. Who are all the lucky peeps? Well, let's find out.

So, without further ado, here are the choices...


Drum roll, please....
🥁🥁🥁 BBBbbbrrrrrrrrr pish 🥁🥁🥁
The people have spoken and their choice for Challenge #95 is… 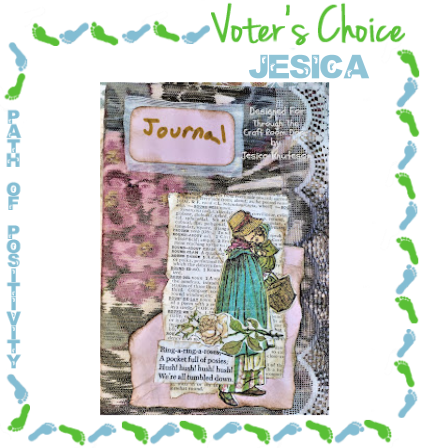 Jesica, you are entitled to receiving a cool and awe inspiring personalized badge for your blog as the Voter's Choice for Challenge #95. Please feel free to copy your badge below... 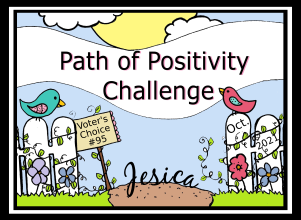 In the category of Most Inspiring, our winner is… 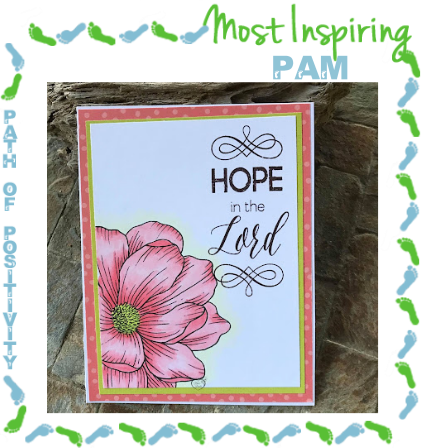 Pam, you have won ONE image (value of $5 or less) from Scribbles Designs, our on-going sponsor providing a prize for the project chosen as Most Inspirational for each of our challenges in 2021.

Pam, you are also entitled to a lovely, one of a kind personalized badge for your blog as the Most Inspiring choice for Challenge #95 which you can find below... 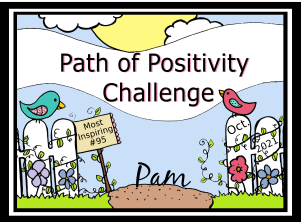 The Random Winner for this challenge (chosen by Random.org),
based on all eligible participants is… 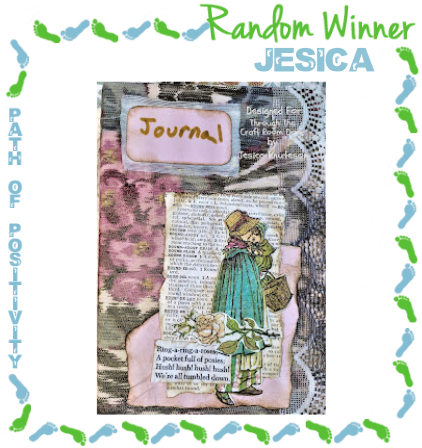 Jesica, you have won A SELECTION OF IMAGES (see original start post) from Ike's Art, our guest sponsor during Challenge #95. 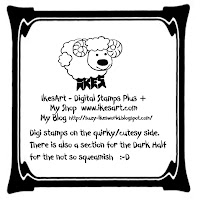 Jesica, you are also entitled to a neat and unique personalized badge for your blog as the Random Winner for Challenge #95 which you can find below... 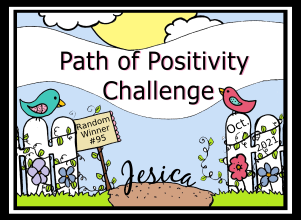 If you have won a prize during this challenge, please send your message to popwinners {at} gmail {dot} com (be sure to replace 'at' and 'dot' with the appropriate symbols), or click HERE to bring our email up in your program, with the subject heading, "WINNER PoP Challenge #95" to make arrangements to receive your prize. Let me know which category you won (Most Inspirational or Random Winner) and also the prize value and sponsor. Please note that I am rather behind these days so it may take me a while to get back to you but I promise I will. I am currently caught up with my mail received in this account.

Now it is time to announce our DT Delights from this challenge. As always, in each challenge you, the readers, get to voice your opinion by voting for your favourite and so it is only fitting that my Design Team get to do so as well.

Thanks to the people who took the time to join along our Path during the month of October for Challenge #95. Out of the eight entries linked up, check out the ones that really caught our attention... 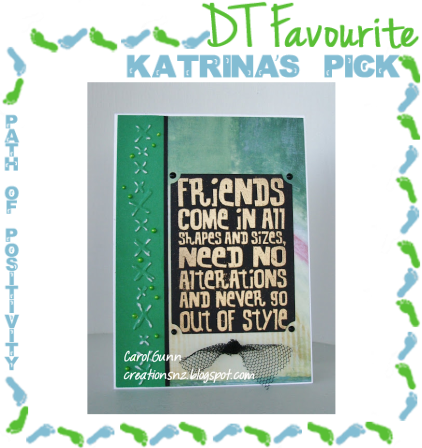 Katrina said this:
"My DT Delight is Carol (#05). What a fun book cover design for this card with the sentiment as the title! Great embossing/sanding and fun rustic heat embossing make for the perfect title/sentiment! Such a delightful card!"
To see the details of Carol's creation and read more of what she had to say click HERE. 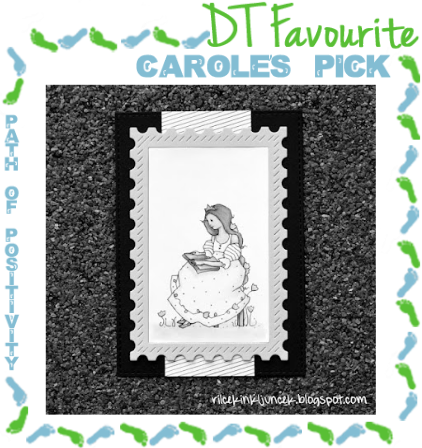 Carole had this to say:
"My DT Delight is Ma-Mi (#08). I love this monochromatic card. It is simple and elegant and has a totally adorable image. Beautiful work!"


To see the details of Ma-Mi's creation and read more of what she had to say click HERE. 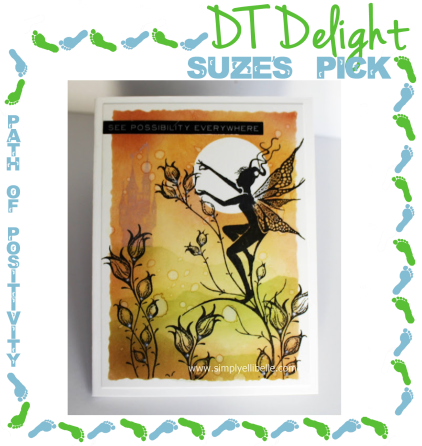 Suze said this:
"My DT Delight is Ellie (#06). I really like the contrast between the silhouette image and the interesting background."


To see the details of Ellie's creation and read more of what she had to say click HERE.

Creative Congratulations to you all!


Thank you to those who played on our Pathway during the month of October. As always we greatly appreciate you sharing your incredible talents with us.

For our DT Delights chosen for this challenge...

You are entitled to one image of your choice from our on-going sponsor...

Please click HERE to check out the image previews. They are arranged into general categories; although, due to the nature of some of these images, they have been repeated in certain applicable categories. If you are interested in claiming a digi, please send me the name of the one image you want and let me know which section it came from. Send your request to popwinners {at} gmail {dot} com (be sure to replace 'at' and 'dot' with the appropriate symbols), or click HERE to bring our email up in your program, with the subject, "PoP#95-DT Delight Digi Request". I'm always running rather behind these days, so your patience is appreciated. I am currently caught up with my mail received in this account.

Additionally, you are entitled to the special Challenge #95 DT Delight Badge which you can find below... 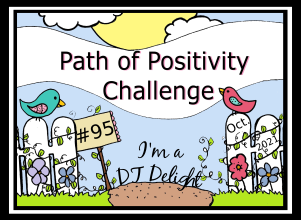 Well, that is it for this one. Please join us again on February 3rd at 6:00 p.m., when I will be announcing some new changes for 2022. Then, as long as everything goes according to plan, we will be back next Monday with our first challenge of the year.

Do your best to continue stay healthy and positive during this crazy time in our lives and hopefully we'll see you all again soon!!!

Path of Positivity will be taking a short break...

HAPPY NEW YEAR folks! I hope that you all had a wonderful holiday season.
I know our regulars were expecting to see a new challenge posted today. Unfortunately, I have been dealing with some tough issues in real life. I briefly touched on this during some of the posts published in December. I have also posted an update on my personal blog as well.
Both my parents were hospitalized after being diagnosed with Covid during the first week of December. My father was released too soon and ended back in the hospital three days later; only this time, in a much worse state. He was diagnosed with bacterial pneumonia and was considered critical when he returned to the hospital. He was pumped full of antibiotics and was on 80% oxygen at the start, slowly weaned down over a two week period. My mom was released after a week in the hospital and thankfully had people coming into the apartment to check on her during her first two weeks. Dad remained on oxygen until they released him on Dec. 19th. Both are extremely weak, exhausted and dealing with the lingering effects of covid (and for my dad, the after effects of having a bad pneumonia as well). Thankfully, for now they continue to have a personal support worker or someone from the Covid Team, checking on them daily throughout the weekdays but it is definitely a challenge for the two of them to look after themselves properly when they are so weak. It has become difficult for them to take care of themselves during normal times, never mind right now. They have been told that it will take MONTHS before they are back to their normal selves.
Worrying about my parents and having to check in on them with daily calls to both the apartment and the hospital depending on where each of them was at the time, left me with time for little else during the first few weeks of December. My stress levels and inability to concentrate greatly affected the quality of my work. Given that at the same time, I was supposed to be getting the team ready for our January challenge, it became necessary to take a little break from taking care of the challenge blogs that I am responsible for in order to maintain my own sanity.
I'm hoping that things will calm down soon and I can come back renewed for our February challenge. If it turns out I need some extra time, I'll be sure to provide an update at that time. I will do my best to publish the winner announcement for our October challenge (no winners for our November one as it was just for fun), sometime over the next couple of weeks.
I hope that we can count on your support and that you'll all come back and join us when we start up again soon! Until that time, wishing you a happy and healthy start to 2022!

Please join us in creating a path of positivity by entering this unique challenge.

Welcome to the Path of Positivity!

Hello everyone! My name is Lisa. In an effort to create a Path of Positivity for people to follow to bring sunshine to our corner of the blogging world, I have created a new type of challenge. To learn the impetus behind its creation, check out the 'Introduction' tab at the top of this page. You will also find tabs in the same location letting you know about the 'Challenge Details', 'Sponsors & Prize Information' and one for 'Challenge Win Information'.

I hope that you will consider adding your positive creations to the Path and join me in this new adventure! If you'd like to visit me on my personal blog click on the Decosse's Dynamite Doodles Badge below.

If you have any questions you can email me at pathofpositivity [at] gmail [dot] com (don't forget to remove brackets and spaces and replace at with the @ sign and a . for where it says dot. Unfortunately, we have to try to keep those spammers away by camouflaging our email addresses but such is life.

Our challenges are listed here... 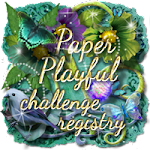 The winners have been announced for Challenge #98. To see who won and who was chosen as a DT Delight, click HERE. To see the top picks, click HERE. To see all the details of the original challenge, click HERE.
To see a list of the winner's from all other previous challenges, click the "Challenge Win Information" tab at the top of this page.

While you can find out ALL the information you need to know in order to participate in the challenge by checking out the 'Challenge Details' tab at the top of the page, here is a refresher of the basics.